Read our alchemy quotes collection below if you are lured into knowing more about the alchemist psychic construct.

Alchemy is all about mystery, love, immortality, and eternal bliss. It is a state of metaphysical change happening inside an individual.

In one of the below alchemy quotes, Julia Cameron talks about alchemy as an art of inner transformation.

Some ancient mystics believe that those who have mastery in alchemy know how to turn metal into gold, how to make a heaven out of hell, how to go beyond fate and destiny, etc.

Alchemists believe in secret dark magic that intertwines man into a paradoxical state where matter and non-matter merge into one.

Our love alchemy quotes collection will interest you greatly if you believe in mysticism.

Top quotes on alchemy and Sayings 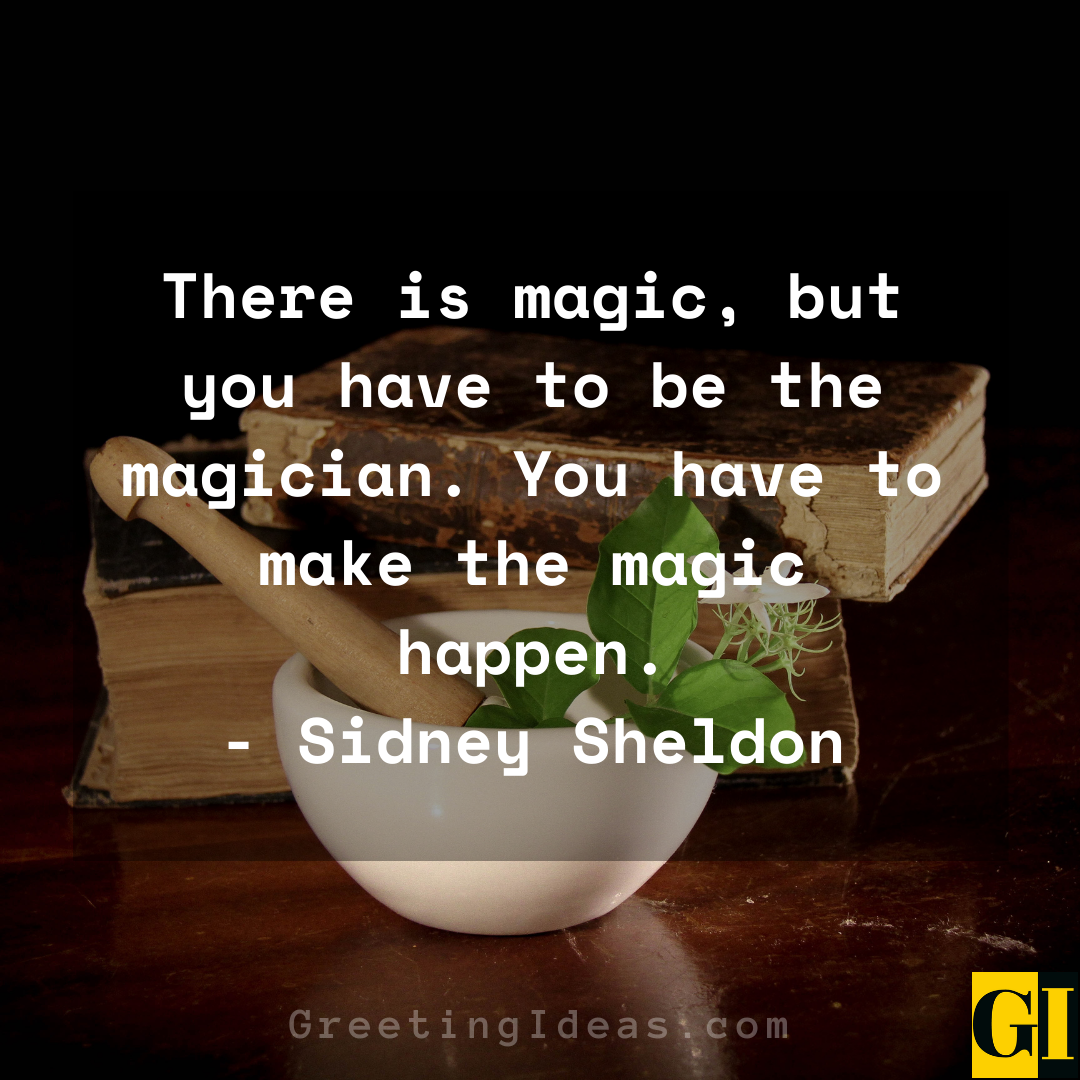 Learn the alchemy true human beings know. The moment you accept what troubles you’ve been given the door with open.
– Rumi

There is magic, but you have to be the magician. You have to make the magic happen.
– Sidney Sheldon

One man’s magic is another man’s engineering.
– Robert A. Heinlein

Real magic can never be made by offering someone else’s liver. You must tear out your own, and not expect to get it back.
– Peter S. Beagle

There is an alchemy in sorrow. It can be transmuted into wisdom, which, if it does not bring joy, can yet bring happiness.
– Pearl S. Buck

Magic is not a practice. It is a living, breathing web of energy that, with our permission, can encase our every action.
– Dorothy Morrison 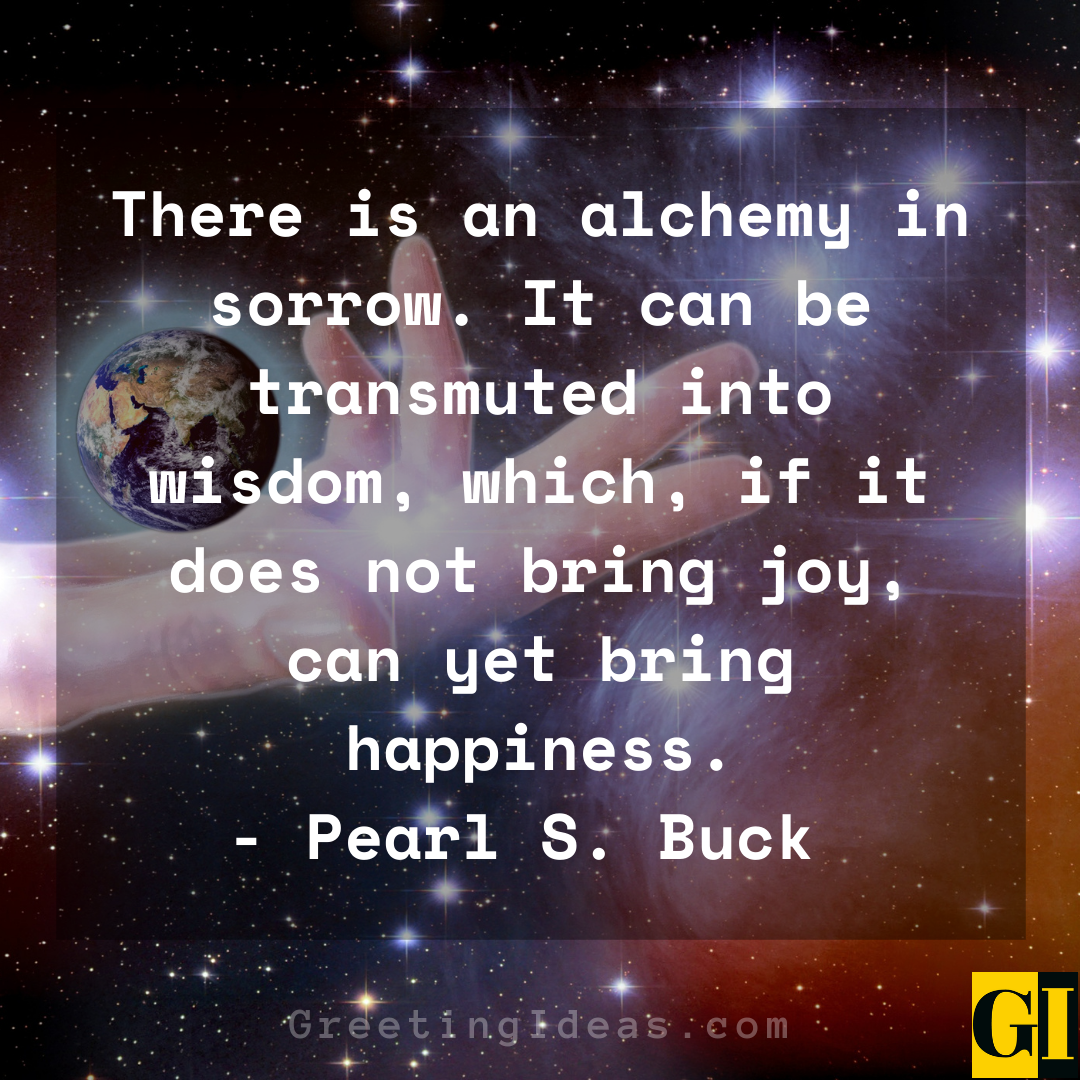 A little magic can take you a long way.
– Roald Dahl

The real alchemy is transforming the base self into gold or into spiritual awareness. That’s really what new alchemy’s all about.
– Fred Alan Wolf

The true alchemists do not change lead into gold; they change the world into words.
– William H. Gass

Alchemy: In times of recession it’s not wise to argue about the price of gold.
– Robin Sacredfire

The universe is full of magical things patiently waiting for our wits to grow sharper.
– Eden Phillpotts 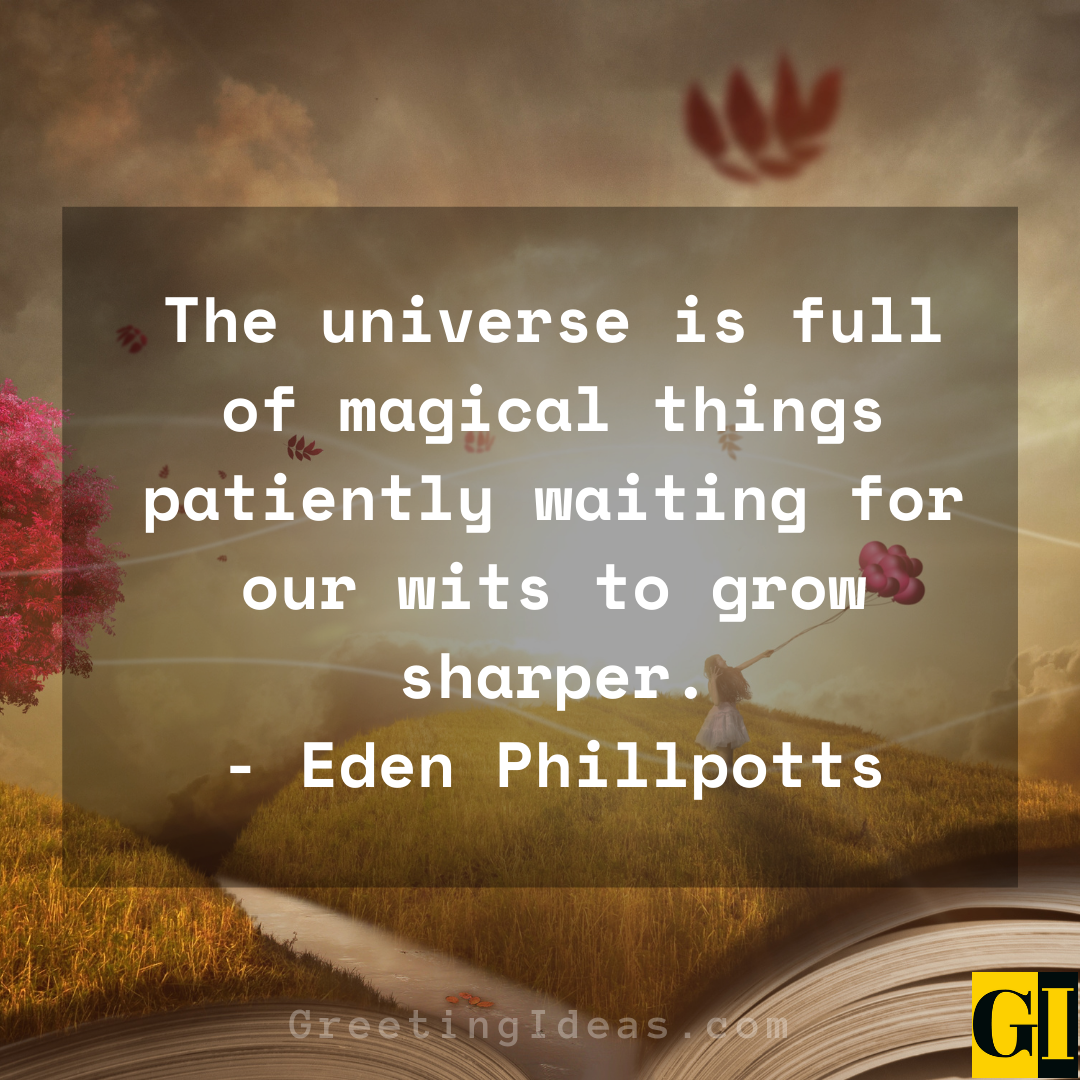 Alchemy. The link between the immemorial magic arts and modern science. Humankind’s first systematic effort to unlock the secrets of matter by reproducible experiment.
– John Ciardi

There is an alchemy of quiet malice by which women can concoct a subtle poison from ordinary trifles.
– Nathaniel Hawthorne

True magic is the art and science of changing states of mind at will.
– Douglas Monroe

Alchemy is really the secret tradition of the redemption of spirit from matter.
– Terence McKenna

Alchemy is the art of manipulating life, and consciousness in matter, to help it evolve, or to solve problems of inner disharmonies.
– Jean Dubuis

Alchemy is the art of far and near, and I think poetry is alchemy in that way. It’s delightful to distort size, to see something that’s tiny as though it were vast.
– Robert Morgan 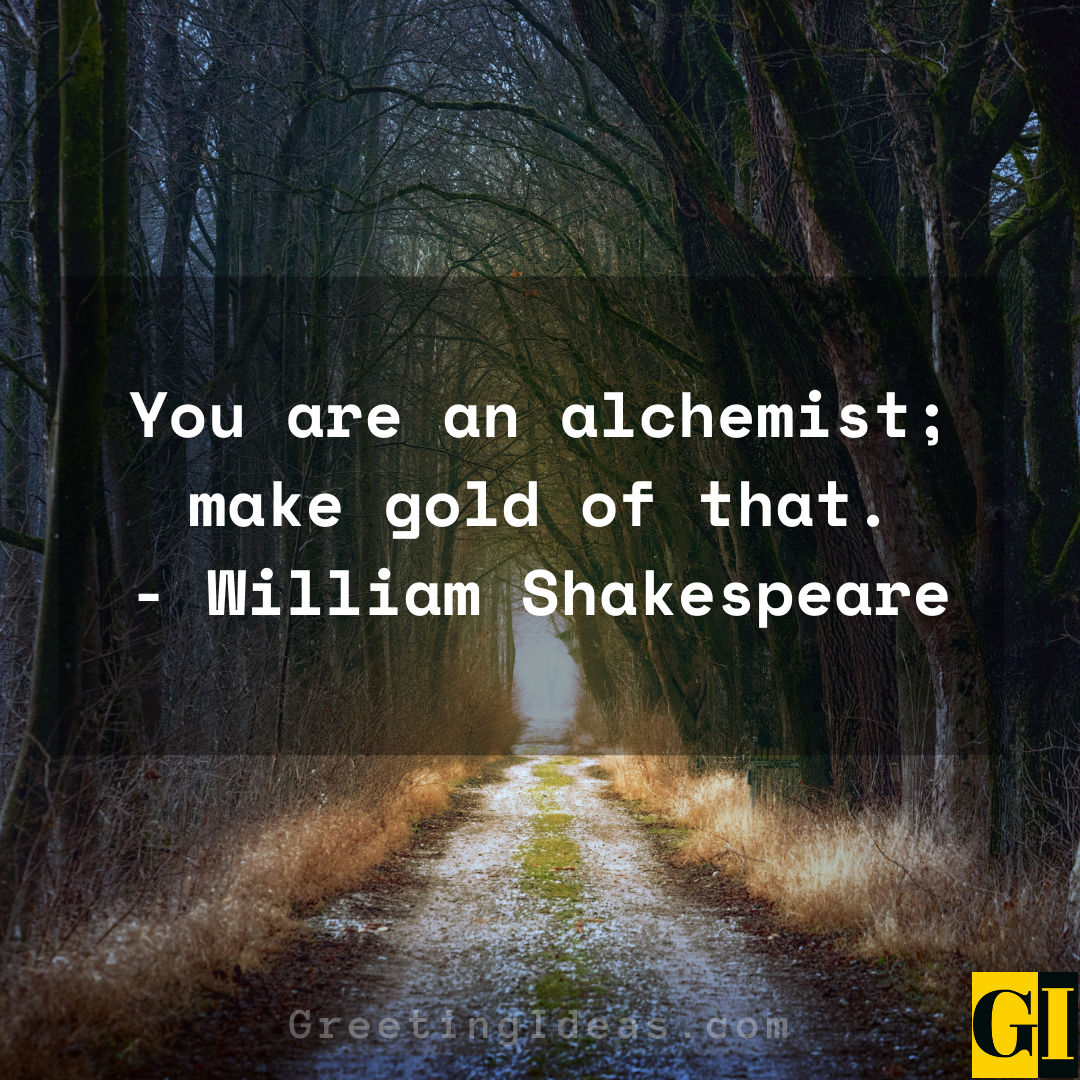 Alchemy is about the generation of a psychic construct, a wholeness, a thing which has many properties, which is paradoxical, which is both mind and matter, which can do anything.
– Terence McKenna

Magic and all that is ascribed to it is a deep presentiment of the powers of science. The shoes of swiftness, the sword of sharpness, the power of subduing the elements, of using the secret virtues of minerals, of understanding the voices of birds, are the obscure efforts of the mind in a right direction.
– Ralph Waldo Emerson

The alchemy of life is to turn coins into cents, by making sense of change.
– Jennifer Sodini

You are an alchemist; make gold of that.
– William Shakespeare

We are master alchemists: We may not have discovered how to make gold out of lead, but we are able to make heaven out of hell, hell out of heaven, and purgatory out of nothing.
– Khang Kijarro Nguyen

At it’s essence, art is an alchemical process. Alchemy is a process of transformation.
– Julia Cameron 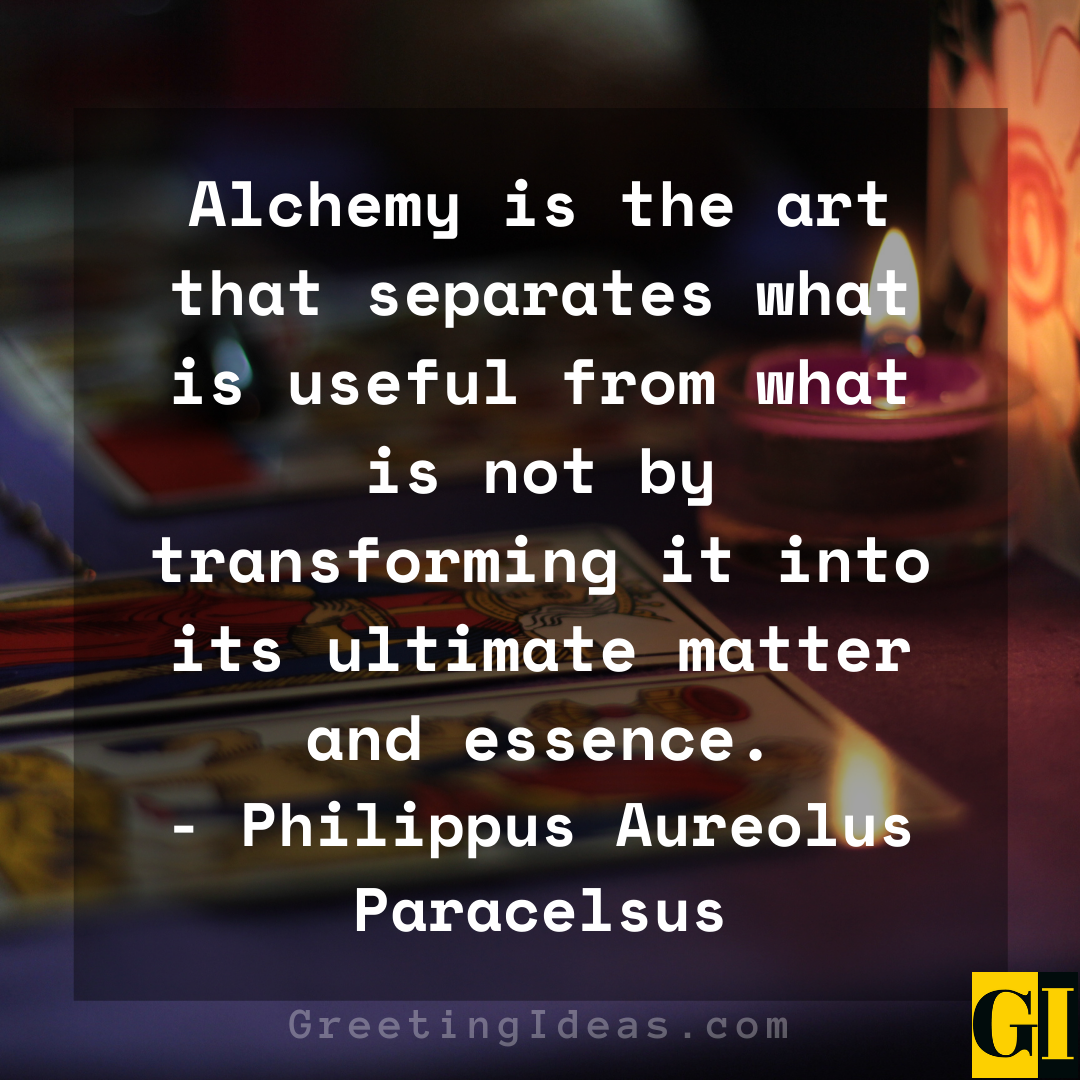 Chymia, or alchemy and spagyrism, is the art of resolving compound bodies into their principles and of combining these again.
– Georg Ernst Stahl

The Alchemy’s secret key is hidden in the laboratory of the man and woman.
– Samael Aun Weor

The secrets of alchemy exist to transform mortals from a state of suffering and ignorance to a state of enlightenment and bliss.
– Deepak Chopra

Alchemy is the art that separates what is useful from what is not by transforming it into its ultimate matter and essence.
– Philippus Aureolus Paracelsus

The alchemy of a fight card is a mysterious thing. Even the most meticulous matchmaking can sometimes misfire.
– Katie Kitamura

The real alchemy consists in being able to turn gold back again into something else; and that’s the secret that most of your friends have lost.
– Edith Wharton

Alchemy is a kind of philosophy: a kind of thinking that leads to a way of understanding.
– Marcel Duchamp

We hope you enjoy reading our alchemy quotes and fall in love with the mystery element attached to it.

The Alchemist, Quotes About Love And The Heart

The Alchemist touches on so many lessons for the heart to learn… not only how precious love for another is, once found, but the importance of loving yourself.

In love, there is fear and suffering, which is worth the heartache for the moments of pure bliss.

“So, I love you because the entire universe conspired to help me find you.”

Share it with your loved ones and in social circles too.

Also, which soul alchemy quotes are your favorite?

Let us know in the comments! 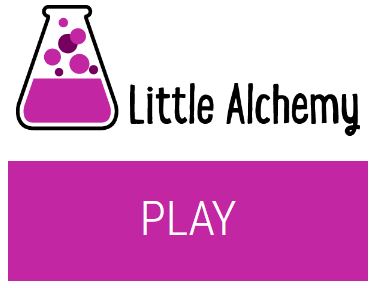 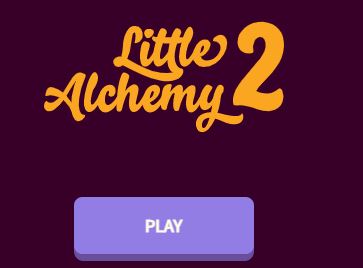